Shekhawati is a region of the state of Rajasthan famous for its villages whose streets overlook decorative houses with many paintings, but in which you can also visit markets, forts and temples. This area, whose name comes from who ruled it in the 15th century, Rao Shekha, is located on the old Silk Road and today it looks like a real open-air museum. There are not too many travelers who arrive to their populations, Mandawa is the most visited and the one with the most hotel infrastructure, besides being the most accessible on the route that arrives from Delhi and continues to Bikaner. 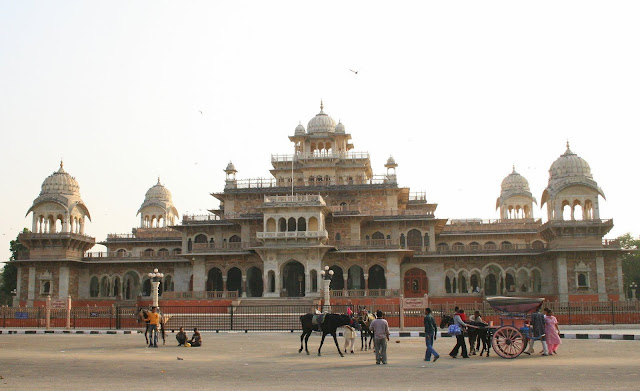 In Shekhawati are the large houses of some of the great industrial families of India , such as the Birla or Goenk. Spacious and decorated with interesting frescoes, most were built between the late eighteenth and early twentieth centuries by local Merwari merchants who had once migrated to large cities such as Mumbai or Calcutta in search of fortune. In their life in those big cities they interacted with the British, which made their homes reflect a new style and their new social position.
Their havelis, which are nothing but traditional Indian houses, proliferated in this semi-arid region surrounded by the Thar desert. All have a similar architecture, in which behind a large door and a richly decorated facade opens a courtyard that surrounds rooms in a couple of heights, in some cases there may even be a second patio, and in all cases the paintings decorate every corner of the house.
The themes of these paintings are very varied. The local artists who painted these frescoes were not limited to traditional paintings with scenes from the life of the gods and allegorical elements. They maintained the one-dimensional style of Rajput painting, but among the images of elephants, gods and goddesses interspersed scenes of the new social reality, so if one searches in these mansions that were symbol of the success of a handful of families you will find cars, gramophones , English ladies and men with a hat.
Havelis of Shekhawati
As I said before, walking through the towns of Shekhawati is walking through a museum at the foot of the street, it is not always possible to visit these homes inside, many remain closed, others are abandoned, some in the care of families who are responsible for maintaining everything in order while the owners live in some big city. For this reason it will depend on the city that you visit, you will have the option of accessing more or less houses that will be in a different state of conservation.
Fatehpur
Founded in 1451 as the capital of the Muslim nababs (regent princes), it was conquered by the Rajputs in the 18th century. It is here where one can find a greater number of havelis, although some in very poor condition. Among them, the Haveli Nadine Prince stands out . It is owned by a French artist who has restored it and created in it a cultural center in which it accommodates foreign students interested in the art of the region, also doing exhibitions in some rooms. It can be visited upon payment and the house is taught by the family that takes care of the house through a guided tour in French or English. It is the perfect way to know how these houses were when they were built and inhabited by their owners.
In addition to walking through the streets of Fatehpur, it is worth getting to the lively market of the city, a place that is not touristic and perfect for buying clothes (there are saris and salwar kamez at good prices), incense or maybe some food. Also, checkout the Palace on Wheels train price and proceed to visit the beautiful place.
Ramgarh
Only 20 kilometers from Fatehpur, this town of Shekhawati founded by a powerful family of merchants also has a few havelis in good condition, but is especially known Shani Temple that contains an ornate interior mirrors.
Mandawa
It is the most well-known and visited population of this area of the Thar desert and can be the ideal base to know the region. It was founded in the eighteenth century and fortified by merchant families. It is nice to walk through its streets in search of the havelis, some have become hotels, others are restaurants, some of them are rented to families who share a house with other families while all of them are responsible for the maintenance of the haveli. Or that is supposed, because the truth is that some are in a quite deplorable state despite living people in them. Those families also try to get some rupees from visitors selling some crafts, since access is free.
If you have the possibility you should not stop going up in these houses to the upper floors to discover new details or even a view over the city. And we must remember that behind an open door a haveli can hide beautiful paintings although today it has become a simple school or a souvenir shop and travelling through the Palace on Wheels train Rajasthan.
In Mandawa there is also a castle, now converted into a hotel, and its outskirts some well-preserved Baooris. These are water deposits, very important in this arid region. In its construction were added small pavilions topped by those domes so typical of Mughal architecture.