Ayat Al Kursi, or the Throne Verse, is a very important passage from the Holy Quran, one which Muslims recite morning, evening and when they go to bed. You would find many homes decorated with an Ayat Al Kursi wall frame. Within the realm of Islamic calligraphy, Ayat Al Kursi wall art is much sought after. 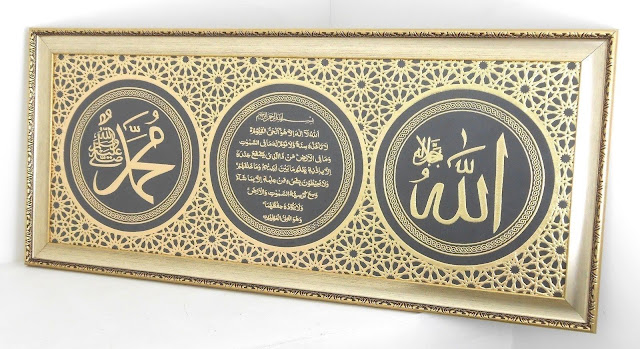 There are several sahih hadith(authentic Prophetic narrations) that report the significance of reciting the Ayat Al Kursi, which which is the 255thayatof Surah Baqarah, the second and the longest surah of the Quran. We list some of the hadith below:
1)      Abu Huraira (RA) reported that the Prophet (peace be upon him) said, “Everything has its splendour, and the splendour of the Qur’an is Surah al-Baqarah. In it is a verse which is the greatest verse of the Qur’an: Ayat al-Kursi.” [Tirmidhi]
2)      Abu Huraira (RA) narrated, “The Prophet (peace be upon him) put me in charge of guarding the alms (zakat) of Ramadan. Someone came to me and began to take handfuls of food. I grabbed him and said, ‘By Allah, I will take you to the Messenger of God!’ – and he mentioned the narration – “He said, ‘When you go to bed, recite the Throne verse (Ayat al-Kursi), and you will have someone guarding over you from Allah and Satan will not come near you until morning.’ The Prophet, may Allah bless him and grant him peace, said, ‘He told you the truth even though he is a liar. That was Satan.’” [Bukhari]
3)      Abu Huraira (RA) narrated that the Prophet (peace be upon him) said, ‘Whoever recites, when he wakes up, the chapter Ha Mim until [the verse ending] ilayhi al-masir and the Throne verse (Ayat al-kursi) is protected, through them, until the evening; and whoever recites them at evening time is protected, through them, until morning.’” [Tirmidhi]
4)      Ayfa’ told of a man who asked the Prophet (peace be upon him) which chapter of the Holy Qur’an was the greatest and was told that it was “Say, He is Allah, One.” He asked which verse of the Qur’an was greatest and was told that it was the Throne Verse, “Allah, there is no god but He, the Living, the Eternal.” He asked Allah’s Prophet which verse he would like to bring good to him and his people and was told, “The end of Surat Al-Baqarah, for it is one of the treasures of Allah’s mercy from under His throne, which He gave to these people, and there is no good in this world and the next, which it does not include.” (Tirmidhi)
It is amply evident clear from the hadith mentioned above as to why the Ayat al Kursi is so significant, and why several Muslims not just read and learn it by heart it but also get it framed for their walls or give Ayat Al Kursi wall art as gifts to loved ones..It should not come to you as a surprise if you see anAyat al Kursi wall frame in a Muslim home.