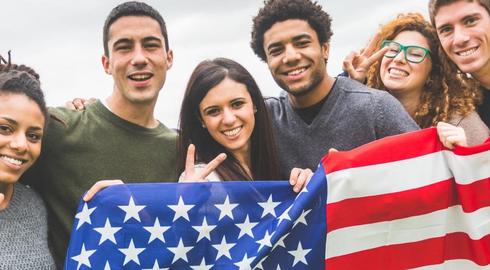 Carnegie Mellon University is located in Pittsburgh, Pennsylvania, and is home to 13,650 students from 114 countries, with 58 percent of graduate students coming from outside the US. It received a near-perfect score of 99.8 for its proportion of international students. And is among one of the top universities worldwide. This university is an alma mater to a huge number of Indian students in the United States, due to its support of event planning and cultural interaction. SPICMACAY (Society for Promotion of Indian Classical Music and Culture Among Youth) is certainly a proof of that.

Illinois Institute of Technology is one of the most preferred study abroad university in the United States with a high percentage of Indian Students. And why shouldn’t it be? They have a large international community, as well as a lot of organizations and activities for Indian students, such as an international cultural night, a Diwali celebration, a Bollywood night, and so on.

With 29 master’s degrees, various Juris Doctors, and three doctorates, the University of San Diego has a high participation in study abroad programs. UCSD is one of the greatest universities for Indian students because of its highly successful study abroad program, among other things. Students are made to feel at ease through organizations such as the Indian Students Association, the USD Pataka, the American Indian Student Organization, and many others.

Massachusetts Institute of Technology (MIT), the world’s top university according to the QS World University Rankings, receives a high score for student diversity and is the highest-ranked US university. International students account for 3,289 of MIT’s 11,331 students, including 42 percent of graduate students. In 2015-2016, the university hosted 539 exchange, visiting, and special students. Aside from providing a prestigious education, the university is also known for providing generou financial help, ensuring that any student accepted will be able to attend.

Boston University was founded in 1869, but it was formerly known as the Newbury Biblical Institute. Today, the University has evolved into a globally renowned institution of higher learning that provides study abroad and exchange programs with satellite campuses. Boston University has it all, whether it’s eating your favorite meal at Chutneys on 334 Massachusetts Ave. or playing Holi with your classmates. It’s one of the few US universities with the majority of Indian students, and it’s located in the center of its namesake city of Boston, Massachusetts.

Northeastern University, based in Boston, Massachusetts, has 18,000 undergraduate students, 3,400 of them are international. The university takes pride in having a worldwide perspective. And it is a very popular study abroad university among Indian Students. NU is without a doubt one of the top universities for Indian students, with several events hosted for and by international students. Events like UTSAV and Sanskriti bring together Indian students in the United States.

Columbia University is another of New York City’s top universities with a big proportion of international students, with 32 percent of its 30,300 students hailing from other countries. The student-led Columbia University Partnership for International Development (CUPID) is one of the university’s global projects, with the goal of enabling multidisciplinary discussion, awareness, and action in the field of multinational development and relief.

Situated in the heart of big apple, New York University allows to immerse yourself in practically every element of your culture. NYU is one of the most popular US universities among Indian students, due to its many areas of study, and is one of the most lauded study abroad university. In addition, NYU offers a plethora of Indian restaurants, such as Masala Times, Thelewala, Mint Masala, and a slew of others, all of which promise delectable Indian cuisine. Furthermore, NYU hosts a vibrant community of events, customs, and cultural encounters that leave no place for nostalgia.

Moving on to Houston, Texas, the most recent numbers from Rice University show that nearly half of its students (3,298 out of 6,623) are international, with an increasing number in recent years. Rice is the most selective university, attracting students with its high student-faculty ratio, as well as its high level of research for a comparatively small university and its applied science programs.

The University of Southern California is a private research university, based in LA. The university is home to the College of Letters, Arts, and Sciences, as well as 21 unique academic schools and units, making it a global center for arts, technology, and international business. The university is home to over 19,000 undergraduates and 26,000 postgraduates and more than 22% of its student body is international. Eleven Rhodes Scholars, nine Nobel Laureates, six MacArthur Fellows, and one Turing Award recipient are among USC’s alumni.

Broadly, the number of Indian students enrolling at universities outside of their own country has been steadily increasing. The key reason behind their choice is the fact that Indian job market values a degree from top universities worldwide university more than a Bachelor’s or Master’s degree earned in India. And to top it all most of the universities in several countries provides top quality of higher education, with top-notch faculties and far better facilities.

So, to sum it up, there are plethora of universities and study abroad destinations, to choose from, and USA, being the most lauded destination tops the list with thousands of international students. Not only undergraduate but there are plenty of top MBA colleges in USA which will help students in expanding their professional network. And furthermore, in a highly competitive job market an international MBA degree is an asset in any industry.